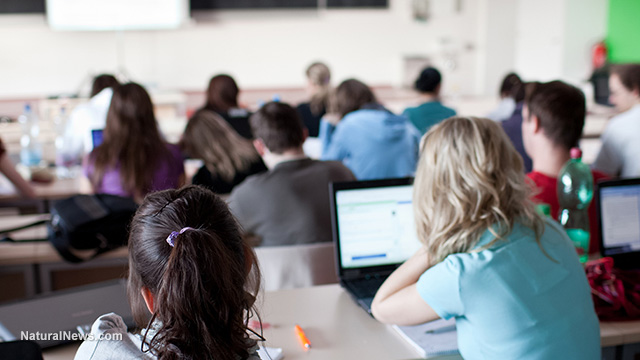 There’s no other way to say it – colleges and universities today are more determined to create an entire generation of radical progressives and social justice activists than a generation of intelligent, hard working Americans.

At Pennsylvania State University, public speaking professor Angela Putman recently published an academic article criticizing the concept of “meritocracy” and calling on her fellow teachers to help dismantle whiteness ideologies and institutional racism. In addition, Putman also designed a three-day seminar addressing the non-issue of white privilege for her students.

After the seminar, Putman was shocked to learn that many of her students actually endorsed what she considered to be “whiteness ideologies” because of the fact that they agreed with the statements, “If I work hard, I can be successful” and “everyone has an equal opportunity to achieve success.” How these outlooks on life are in any way connected to whiteness or racism is anyone’s guess, but Professor Putman decided to pursue the issue further.

In her article, Putman argued that students “are socialized to believe that we got to where we are… because of our own individual efforts,” particularly inside of the classroom. She went on to write, “Thus, whiteness ideologies may be reproduced through a general acceptance and unchallenging of norms, as well as through everyday discourse from a wide variety of racial positionalities.”

In order to get more and more young people on board with her radical ideology, Professor Putman believes that other educators must teach students to reject meritocracy and the idea of equal opportunity for all. According to her, professors need to teach “how racism and whiteness function in various contexts, the powerful influence of systems and institutions, and the pervasiveness of whiteness ideologies within the United States,” adding that the use of “role-play activities” and “readings, discussions, films and activities” are all good options for accomplishing this task.

By learning more about whiteness ideologies in the classroom, Professor Putman hopes they will be inspired to “resist perpetuating and reifying whiteness through their own discourse and interactions,” and also learn to fight “manifestations of racism and whiteness within U.S. institutions and systems.”

It goes without saying that this sort of liberal indoctrination being forced down the throats of students in the classroom is entirely inappropriate and absolutely despicable. Forget about math, history, and American literature; today, school is all about social justice and dismantling “institutionalized racism.” As a result, students will grow up to be left wing political activists rather than intelligent, hard working Americans.

As sick as Professor Putman’s outlook on life is, the destruction of individualism and strong work ethic is something that the progressives have been working towards for quite some time now, and not just within the classroom. When Barack Obama stood before the entire country and famously declared that the American businessman only became successful because of government aid and assistance, this was an attempt to dislodge the American people from their firmly held belief in self-reliance, rugged individualism, and hard work. Even more than that, it was a complete rejection of the values and principles that America was founded upon – but then again, that’s never stopped the left before, has it?

The truth is, people like Professor Putman, Barack Obama, and most other liberal progressives want to create a country that emphasizes the collective rather than the individual. This is exactly why Professor Putman wrote her article about the need of educators to dismantle meritocracy and the idea of equal opportunity – both of these concepts have to do with the individual pursuit of happiness, which cannot exist alongside a massive, centralized federal government.