According to Maxine Waters, Ben Carson is a “White Nationalist” … even though he’s black 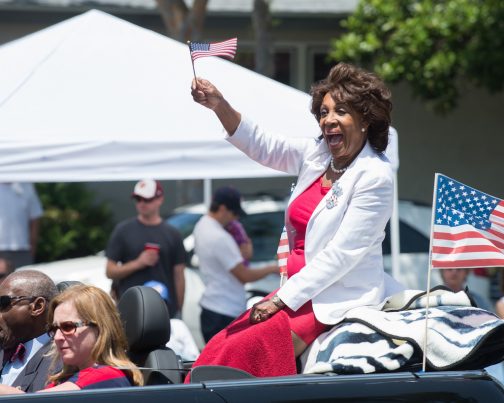 Alt-Left Democrats have decided that as long as the word “Trump” is associated with any portion of their political rhetoric it a) will be believed; and b) it’s valid.

Even if what they’re saying is the most bizarre, factually inaccurate BS you could imagine.

Enter Rep. Maxine Waters of California. Her hatred of and hostility towards President Donald J. Trump is so pervasive she now sees white racism in black Trump Cabinet officials.

As reported by the American Mirror, Waters recently accused Housing and Urban Development Secretary Dr. Ben Carson of being a “white-wing nationalist.”

In an appearance before the Los Angeles Community Review Board, she launched into an anti-administration tirade aimed at Carson and Treasury Secretary Steve Mnuchin. Claiming that there is “uncertainty” in the country thanks to the Trump White House, she said, “Mr. Mnuchin, who is the Treasury secretary, who is responsible for over 36,000 foreclosures in this area, is now the secretary of the Treasury.”

Yes, she did repeat herself. And yet we’re supposed to believe her when she claims Trump is unhinged.

Anyway, the 79-year-old stammered forward: “Standing next to him just yesterday, or day before yesterday, I’m getting these days mixed up.”

Continuing, Waters — the Alt-Left’s new darling — said, “While the president was defending the white-wing (sic) nationalists and the KKK and all of those alt-right groups that were basically out there in Virginia literally beating and marching and ranting about Jews and black people, etc., etc. … but this is what this Cabinet looks like,” she said, doubling back to Trump’s administration, “whether we talking about Mnuchin or Ben Carson.”

Carson, of course, is African-American, just like Waters. But skin color only matters to her when a) she is attempting to claim racism for [fill in the blank]; and b) anytime anyone of any color espouses conservative political ideology and values.

Waters then promised the crowd she would hammer Carson in short order. “He’s got to come before my committee,” she said. “If you think ‘reclaiming my time’ that I did with Mnuchin, you wait till Ben Carson comes.”

And the crowd of lemmings roared their approval. (Related: Crackpot Maxine Waters now liar-in-chief: ‘I never called for Trump’s impeachment.’)

As The American Mirror noted further, Waters isn’t the only one who is launching broadsides against Carson. As the Washington Times noted recently, Carson’s D.C.-area home in Virginia was vandalized with anti-Trump “hateful rhetoric.”

Mr. Carson wrote a now-viral Facebook post in response to the deadly protests in Charlottesville, Virginia, recalling two personal stories that demonstrated the benefits of Americans listening to one another and taking the high road as opposed to wallowing in their own hate.

“Regarding all of the racial and political strife emanating from the events in Charlottesville last weekend, let me relate a story,” he began. “Several years ago we bought a farm in rural Maryland. One of the neighbors immediately put up a Confederate flag. A friend of ours who is an African-American three-star general was coming to visit and immediately turned around concluding that he was in the wrong place. Interestingly, all the other neighbors immediately put up American flags shaming the other neighbor who took down the Confederate flag.”

Continuing, he noted, “More recently our home in Virginia along with that of a neighbor was vandalized by people who wrote hateful rhetoric about President Trump. We were out of town, but other kind, embarrassed neighbors cleaned up most of the mess before we returned.”

He said both stories should be a lesson to Americans wanting to combat hate; they can do so using the “right tools.”

What sage advice from a very kind, gentle man who is just trying to serve his country. There could not be a starker difference between him and an Alt-Left troublemaker like Waters, who prefers to keep the masses tuned up with divisive rhetoric, and all for personal political gain.