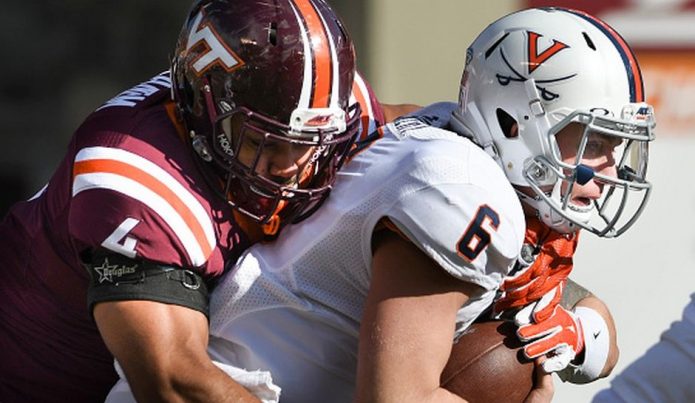 The far Left’s insanity manifests itself in new and inventive ways each and every day, as practitioners of political correctness try to outdo each other in acts of sheer madness.

The most recent outrage among the brain dead sheep involves once-great network ESPN, which has devolved into a sports version of MSNBC and, in fact, some days would give the uber-liberal “news” network a run for its money.

As reported by the sports site OutkickTheCoverage:

In a story that seems made for The Onion, but is actually true, according to multiple Outkick fans inside ESPN MSESPN decided to pull an Asian college football announcer named Robert Lee off the William and Mary at University of Virginia college football game because they were concerned that having an ASIAN FOOTBALL ANNOUNCER NAMED ROBERT LEE would be offensive to some viewers.

Did I mention that Robert Lee is Asian?

Note the reference to MSESPN, which I frankly think is clever beyond belief.

Anyway, the site went onto report that Lee was moved to cover the Youngstown State vs. Pittsburgh game instead on opening college football weekend, which is Sept. 2; ESPN moved Dave Weekly into Lee’s spot.

The post, written by Clay Travis, who is with rival network Fox Sports, went on:

…[S]eriously, is there anything more pathetic than ESPN believing people would be offended by an Asian guy named Robert Lee sharing a name with Robert E. Lee and calling a football game? Aside from some hysterical photoshops and Internet memes which would make everyone with a functional brain laugh — Robert E. Lee pulling out all the stops to stay in Charlottesville now! — what was the big fear here? Does ESPN really believe people are this dumb or that having an Asian announcer named Robert Lee is too offensive for the average TV viewer to handle? Yes, yes they do.

After the post went viral, the idiots at ESPN issued this clarification: “We collectively made the decision with Robert to switch games as the tragic events in Charlottesville were unfolding, simply because of the coincidence of his name. In that moment it felt right to all parties. It’s a shame that this is even a topic of conversation and we regret that who calls play by play for a football game has become an issue.”

No, what’s a shame is that the same Leftist mentality created the hostile situation in the first place. Right, right — there were neo-Nazis and white supremacists at Charlottesville, I get that. Everyone knows that.

But most people also know that in the Age of Trump the Left has gone insane, using and then justifying violence to attack every remaining vestige of traditional American culture and values. Statues that have stood for more than 100 years are now suddenly intolerable; people who chose to believe and support a competing political ideology are branded racists and shouted down and beaten; Asian guys with names similar to those of long-dead Confederate generals must be shielded and moved to a different venue, lest he be accosted and harmed by the very same extremists who claim to be oh-so-tolerant and accepting.

It’s madness. But it just Keeps. Getting. Worse. (Related: Extermination is Tolerance: Harvard proposes a ban on fraternities, sororities, and single-gender clubs.)

If there is a bright spot in any of this, it is a just-released survey conducted by polling firm Rasmussen Reports, which found that an overwhelming 85 percent of respondents believe the Constitution’s free speech guarantee is much more important “than making sure no one is offended by what others say.”

And more: Seventy-three percent concurred with the famous line that is often attributed to Voltaire: “I disapprove of what you say but will defend to the death your right to say it.”

Still, this is America: There should be 100-percent agreement with the Constitution’s First Amendment. That there isn’t is a story in and of itself.