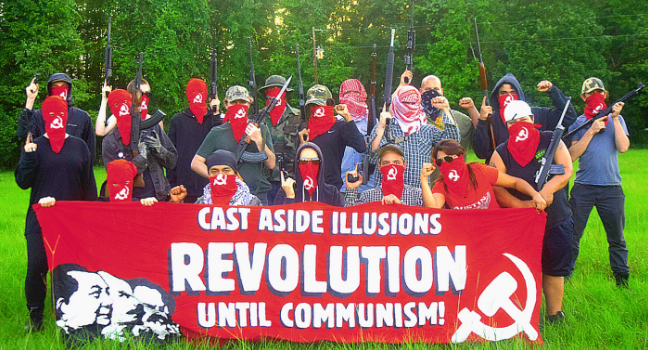 For decades, those on the extreme left have been vocal advocates of imposing more regulations on the Second Amendment so as to decrease both the number of guns on the streets as well as the national crime rate, a relationship that has been largely debunked time and time again. It’s ironic, however, that now that President Trump is in office, more and more left wing extremist organizations are starting to rise up, wielding firearms and openly calling for a violent revolution. It would appear that they oppose the idea of decent, law-abiding Americans owning firearms for personal self-defense, but when it comes to imposing their radical totalitarian agenda, these groups are all for it.

One of these groups is Red Guards Austin, a left wing terrorist organization hell-bent on introducing communism into the United States. On their website, Red Guards Austin describes themselves as “an autonomous Marxist-Leninist-Maoist collective based in Austin, Texas.” In a section labeled “Why We Are Boycotting the Elections,” they explain how the “capitalist-imperialist system is one where the ruling class holds all the power, and because of that fact, the only democracy that exists is ruling-class democracy.” 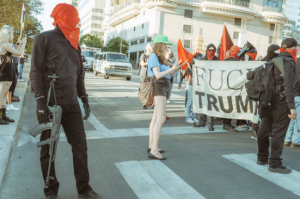 Later, Red Guards Austin explains why they don’t run candidates in elections: “Real change, the type this country desperately needs, does not and cannot come from the ballot box. The end of capitalism is what is required, and that requires millions of active participants.” (Related: America’s universities are becoming training camps for left wing extremism.) 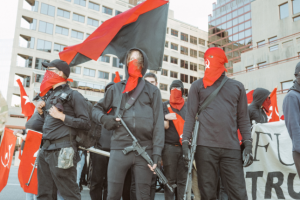 As extreme as they are, there is one thing that Red Guards Austin got right – this country does need change. However, the type of change that we should be working towards has nothing to do with the centralization of power or the establishment of a communist state; rather, it has to do with decreasing the size of the federal government and returning the United States back to its constitutional roots. 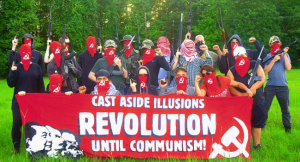 Furthermore, being an advocate for communism because you oppose an oppressive “capitalist-imperialist system” doesn’t even make any sense. The truth is, a communist state would be more oppressive and more despotic than any capitalist or wealthy CEO could ever be.

If you were truly looking to end oppression and give everyone an equal playing field, then you would embrace capitalism, not reject it. As much as the radical left will tell you otherwise, there is no fairer economic system than the free market, which is based on individual liberty and property rights. Unlike socialism and communism, capitalism does not see demographics. How much you earn is not based on your gender, your race, your religion or your sexual orientation; rather, it is based solely on innovation, creativity, and the drive to become successful.

Sadly, Red Guards Austin isn’t the only radical left wing group that is arming up in opposition to President Trump. Redneck Revolt is an organization that describes itself as an “above ground militant formation” founded in June of last year. Claiming that they have over 30 vetted branches across the country, Redneck Revolt supports the idea of “militant resistance” to white supremacy and capitalism, much like Red Guards Austin’s opposition to what they consider to be a “ruling class democracy.” In a 36 page handbook published on their website, Redneck Revolt includes specific sections on guerilla warfare, including “sabotage,” “kidnapping,” “executions,” “armed propaganda,” and “terrorism.” (Related: Liberals turn to hate as they unleash violent beatings on Trump supporters.)

You’ll notice that the progressives in the media and in Washington DC are very reluctant to call out groups like Red Guards Austin and Redneck Revolt, even though they are openly calling for an armed revolution. If the left wanted to maintain even a shred of integrity, then they would immediately condemn these violent organizations and distance themselves as much as they possibly can. Otherwise, all of their credibility (which wasn’t much to begin with) will be tossed out the window.