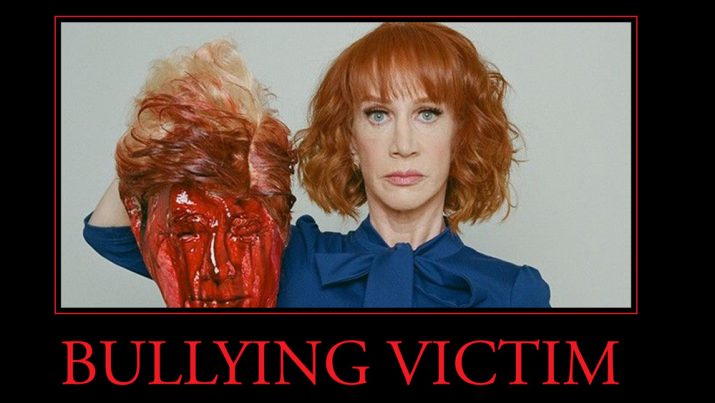 By now tens of millions of Americans have heard about — and were disgusted by — “comedienne” Kathy Griffin’s disgusting and outrageous act of ‘protest’ against President Donald J. Trump by posing for a picture of herself holding a mock, bloodied decapitate head of the president.

The picture — and accompanying behind-the-scenes video — went viral as soon as it was posted, and while some sick, sadistic reprobates on social media attempted to defend Griffin’s indefensible act because it was directed at Trump — as if somehow it’s okay because it’s Trump — the vast majority of response to what she did has been negative.

In addition, the stunt cost her financially as well; several venues have canceled previously scheduled comedy shows, she lost her New Year’s Eve gig at CNN and advertisers have dropped her as a spokeswoman.

All of this is good; Griffin, who has always been edgy but never threatening in her comedy, should suffer for this. Trump is no longer a reality TV host, WWE participant or billion-dollar dealmaker, he’s the president of the United States and, like it or not, deserves a modicum of respect for wanting to serve his country. (RELATED: Insane Democrat Base Demanding Nothing Short Of Impeachment For Trump But The Party Knows It Can’t Deliver)

But there is something else that is highly disturbing about this entire incident that deserves a special rebuke: Griffin did what she did specifically to target Trump’s youngest child, son Barron.

Oh, she claimed during her pathetic ‘Boo-hoo, woe is me’ press conference on Friday that she “would never do anything to harm a child” after hearing reports that the boy shrieked for his mother when he inadvertently saw Griffin’s repulsive picture on a TV report, thinking that perhaps it might just be his father.

Indeed, the president himself tweeted out that the image severely upset his son:

Kathy Griffin should be ashamed of herself. My children, especially my 11 year old son, Barron, are having a hard time with this. Sick!

Griffen, during her presser, said she “would never want to hurt anyone, especially a child.” But as Breitbart News noted, Griffen directed her stunt specifically at Barron, as she said she would do shortly after Trump won the presidency. It was a pre-planned assault.

In an interview she did with Vulture, Griffin said:

“Now more than ever we must absolutely go for all the absurdities … For me, that’s Trump and all things Trump. It’s not about trying to be an equal-opportunity offender anymore because Hillary got such a beat down. It’s his turn. So I’m happy to deliver beat down to Donald Trump — and also to Barron. You know a lot of comics are going to go hard for Donald, my edge is that I’ll go direct for Barron. I’m going to get in ahead of the game [emphasis added].”

Fox News host Tucker Carlson hit the nail on the head when he likened Griffin’s disgusting stunt to the modern Left: Her behavior is precisely who they are, and the Democrats they align with are the country’s largest organized hate group.

“Griffin is an important figure in American life and that she’s the perfect embodiment of what the modern left beliefs,” he said during a recent opening segment of his program.

He went on to note that playing the victim in all of this also takes a page right out of the liberal/progressive playbook.

“In other words, she is the real victim here. Of course she is, liberals are always the victims,” he said. (RELATED: Kathy Griffin’s desperate, pathetic attempt to blame Trump for her lunacy)

In his own column in which he discussed the Griffin lunacy, Natural News and NewsTarget.com editor and founder Mike Adams, the Health Ranger, called her news conference performance “crybully mastery:”

Up-and-coming crybullies take note: If you really want to master the art of crybully tactics, watch and learn how Kathy Griffin does it.

Just pathetic. This entire episode proves beyond a doubt that there is no “reconciling” with the Left, no “reasoning” with them, no “compromising.” These vile, disgusting people must be defeated — politically, culturally, academically and any other way necessary, before they destroy our country.