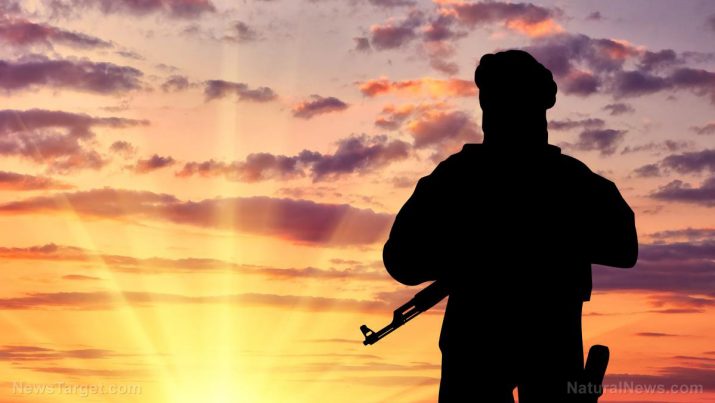 The latest ISIS-linked terror attack has killed 7 and hospitalized 49 people in London, even as the insanely delusional “progressive” media insists there’s “no reason to be alarmed” while radical Islamic fundamentalism wages open warfare on Western civilization. The mayor of London, a practicing Muslim, practically denounced anyone concerned with the terror attack that just took place, saying, “there’s no reason to be alarmed.”

Really? These are the same people who insist we should all hyperventilate in a total panic when they claim global warming might raise the oceans by a few inches over the next century. But when radical terrorists are blowing us up right now, we’re told to just calm down and stop thinking about it.

As I wrote two weeks ago in an article entitled The bombings have only just begun: “Progressive” Western civilization is slaughtering itself by foolishly appeasing those who seek to destroy it:

Western civilization, you see, has become obsessed with self-induced idiocy and political correctness that’s so insane, its political leaders can’t even muster the will to engage in simple acts of self-defense against a cultural onslaught. Western Europe, in particular, is being overrun by radicals who practice an extreme, violent form of Islam that has zero tolerance for anyone who isn’t obedient to their narratives.

Even as the London stabbings featured radical Islamic terrorists screaming, “This is for Allah”, the complicit mainstream media pushes its progressive P.C. agenda of absurdly claiming that anyone blaming ISIS for their acts of terrorism is guilty of “Islamophibia.” Somehow, it’s wrong to name those who are carrying out acts of death and terror because we should “embrace” people of every religion (except Christianity, of course, which is incessantly vilified by the left-wing media).

President Trump is absolutely right when he says, “We must stop being politically correct and get down to the business of security for our people. If we don’t get smart it will only get worse…

We must stop being politically correct and get down to the business of security for our people. If we don't get smart it will only get worse

The P.C.-obsessed liberal media has become so detached from reality that they now seem to side with ISIS rather than America. It’s almost as if they want to see Western civilization torn apart, overrun and destroyed with radical Islamic terrorism. In fact, Kathy Griffin recently echoed the tactics of ISIS terrorists with her decapitated Trump stunt that spectacularly backfired. Her message was very clear, however: She’s with the terrorists, and she wants to see Trump — and presumably all his supporters, too — beheaded in a murderous “cleansing” run by the totalitarian Left.

Remember that Kathy Griffin also a very outspoken supporter of the LGBT community as well as a former CNN host with Anderson Cooper. She’s friends with Al Franken, the radical left-wing Senator who also despises America and was only elected in the first place due to widespread left-wing voter fraud. The political Left is now openly and unabashedly embracing the visual imagery, intimidation tactics and bullying strategies of ISIS. It seems to be the perfect fit for their radical anti-American ideology that hopes to see this nation stomped out of existence.

It’s no exaggeration to say that Leftists hate Trump more than they hate ISIS terrorists, and they openly welcome more terrorists into their liberal countries even as those terrorists are systematically bombing their capitol cities and carrying out mass murder rampage attacks on their citizens. Meanwhile, Merkel, May and Macron remain willfully blind to the reality of radical Islamic terrorism, pretending that the very people stabbing their citizens are somehow “refugees” needing to be rescued rather than soldiers of war who are occupying their intended targets in order to carry out tactical assaults of mass murder and mayhem. Many Western nations are actually financially subsidizing the very terror cells now waging war against their citizens. When will the P.C. insanity end?

Apparently, the only thing worse than calling out radical Islamic fundamentalists is being named Bill Maher and referring to yourself as a “house [email protected]@er.” Somehow, that “went too far” in America, even when being a radical Muslim who opens fire on a gay bar in Miami is somehow moderately acceptable to the Left. Even when Muslim culture executes gays, demeans women and mutilates the genitals of female children, it’s all excused by the delusional Left which pretends to have a monopoly on “compassion.”

We the people must defend our own nations, even if our morally bankrupt bureaucrats and media voices will not

It’s now becoming obvious to all that the blindness of progressives has never been more extreme… or dangerous. In a time when all of us are now threatened by radical terrorism rooted in a twisted, violent rendition of Islamic fundamentalism, nearly all the leaders of Western nations are asleep at the wheel, deliberately “dumbfounded” by the acts of war taking place all around them. Perhaps the members of the liberal mob can fool each other with their blatant denialism, but they’re not fooling the People.

We the People know exactly what is happening: We are under assault. Our nations are being occupied by enemy forces. Terror cells are being activated to murder our families and fellow citizens. Determined efforts are being waged by international terrorist funding villains — such as George Soros — to undermine liberty, national sovereignty and even the very concept of national borders.

An all-out war is being waged against Western civilization, and the war is being waged not merely by ISIS but also Google, Facebook and Twitter. The tech giants and left-wing media have joined forces with radical Islamic terrorists to suppress any real news coverage of their wartime attacks while smearing defense-minded citizens as “racists” or “bigots” for daring to want to defend their borders against a violent invading force.

The only real question in all this is: How much longer with the sheeple stay asleep while their home nations are being overrun and occupied by radical, violent forces? When will Western civilization finally wake up and rise to its own defense? And when that day comes, will it already be too late?

Stay informed at Terrorism.news as we continue to cover unfolding events in our chaotic world, where western “progressives” are deliberately sleepwalking through their own self destruction. You are witnessing the politically correct SUICIDE of Western culture, much to the amusement of George Soros, Barack Obama and Hillary Clinton, all of whom have long sought to overthrow our constitutional Republic and replace it with a totalitarian Leftist regime run by insane elitists.